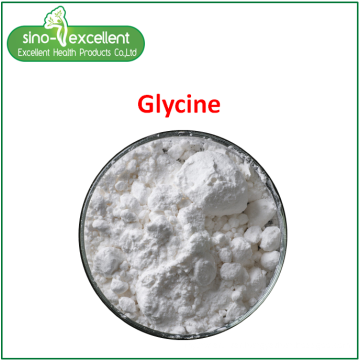 Glycine Usage And Synthesis
Amino acids with the simplest structure
Glycine is of the simplest structure in the 20 members of Amino Acid series, also known as amino acetate. It is a non-essential amino acid for the human body and contains both acidic and basic functional group inside its molecule. It exhibits as a strong electrolyte an aqueous solution, and has a large solubility in strong polar solvents but almost insoluble in non-polar solvents. Moreover, it also has a relative high melting point and boiling point. The adjustment of the pH of the aqueous solution can make glycine exhibit different molecular forms. The side chain of glycine contains only a hydrogen atom. Owing to another hydrogen atom connecting to the α-carbon atom, the glycine is not optical isomer. Since the side bond of glycine is very small, it can occupy space which can`t be occupied by other amino acids, such as those amino acids located within the collagen helix. At room temperature, it exhibits as white crystal or light yellow crystalline powder and has a unique sweet taste which can ease the taste of acid and alkaline taste, masking the bitter taste of saccharin in food and enhance the sweetness. However, if an excessive amount of glycine is absorbed by body, they not only can`t be totally absorbed by the body, but will also break the balance of the body's absorption of amino acids as well as affect the absorption of other kinds of amino acids, leading to nutrient imbalances and negatively affected health. The milk drink with glycine being the major raw material can easily does harm to the normal growth and development of young people and children. It has a density of 1.1607, melting point of 232~236 °C (decomposition). It is soluble in water but insoluble in alcohol and ether. It is capable of acting together with hydrochloric acid to form hydrochloride salt. It is presented in the muscles of animals. IT can be produced from the reaction between monochloro acetate and ammonium hydroxide as well as from the hydrolysis of gelation with further refining.


Used for the pharmaceutical industry, organic synthesis and biochemical analysis.
Used as a buffer for the preparation of tissue culture media and the testing of copper, gold and silver. In medicine, it is used for the treatment of myasthenia gravis and progressive muscular atrophy, hyperacidity, chronic enteritis, and children hyperprolinemia diseases.
Used for the treatment of myasthenia gravis and progressive muscular atrophy; treatment of excess stomach acid ester disease, chronic enteritis (often in combination antacid); using in combination with aspirin can reduce the irritation of the stomach; treatment of children hyperprolinemia; as the nitrogen source for generating non-essential amino acid and can be added to a mixed amino acid injection.
Glycine is primarily used as a nutritional additive in chicken feed.
Used as a kind of nutritional supplement which is mainly used for flavoring.
Flavoring agent: Used for alcoholic beverage in combination with alanine; the addition amount: grape wine: 0.4%, whiskey: 0.2%, champagne: 1.0%. Others such as powder soup: 2%; lees marinated foods: 1%. Because it is tasted like shrimp and cuttlefish, and thus can be used in sauces.
It has some certain inhibitory effects on the Bacillus subtilis and E. coli and thus can be used as the preservatives of surimi products and peanut butter with the added amount being 1% to 2%.
Buffering effect: Because glycine is amphiprotic ions containing both amino and carboxyl groups, it has a strong buffering property on the taste feeling of salt and vinegar. The added amount is: salted products: 0.3% to 0.7%, acid stain product: 0.05% to 0.5%. Antioxidant effect (with its metal chelation): being added to butter, cheese, and margarine extend the storage duration by 3 to 4 times. To make the lard oil in baked food be stable, we can add 2.5% glucose and 0.5% glycine. Adding 0.1% to 0.5% glycine to the wheat flour for making convenient noodles can play a role of flavoring. In pharmacy, it is used as antacids (hyperacidity), therapeutic agent for muscle nutritional disorder as well as antidotes. Moreover, glycine can also be used as the raw material for synthesizing amino acids like threonine.
It can be used as a spice according to the provisions of GB 2760-96.
Glycine is also known as aminoacetic acid. In the field of pesticide production, it is used for synthesizing the glycine ethyl ester hydrochloride which is the intermediate for the synthesis of pyrethroid insecticides. Moreover, it can also be used for synthesizing fungicides iprodione and solid glyphosate herbicide; in addition it is also used in various kinds of other industries such as fertilizer, medicine, food additives, and spices.
Used as a solvent to remove carbon dioxide in the fertilizer industry. In the pharmaceutical industry, it can be used as amino acid preparations, the buffer of chlortetracycline buffer and as the raw material for synthesizing the anti-Parkinson's disease drugs L-dopa. Moreover, it is also the intermediate for producing ethyl imidazole. It is also an adjunct therapy medicine for treating neural hyperacidity and effectively suppressing excess amount of gastric ulcer acid. In the food industry, it is used for the synthesis of alcohol, brewing products, meat processing and cold drinks formula. As a food additive, glycine can be used alone as a condiment and also used in combination with sodium glutamate, DL-alanine acid, and citric acid. In other industries, it can be used as a pH adjusting agent, being added to the plating solution, or used as the raw material for making other amino acids. It can further be used as biochemical reagents and solvent in organic synthesis and biochemistry.
Used as the intermediates of pharmaceutical and pesticide, decarbonation solvents of fertilizers, plating fluid, etc.
Used as a solvent for removing carbon dioxide in the fertilizer industry. In pharmaceutical industry, it is used as the buffer of chlortetracycline, amino antacids, and used for the preparation of L-dopa. In food industry, it can be used as flavoring agents, agent for removing saccharine bitter taste, for brewing, meat processing, and preparation of soft drinks. In addition, it can also be used as a pH adjusting agent and used in the preparation of the plating solution.
Used as biochemical reagents for the pharmaceutical, food and feed additives; it can also be used as a non-toxic decarbonization agent in the field of fertilizer industry.

Sino-excellent provides solutions for human nutrition, beauty, food, pharmaceuticals and animal nutrition. Excellent has grown to become a global business, providing a wide range of functional products across 60 countries, with 600+ kinds of products

With over a decade of active industry experience, our wide range of supply chain capabilities allows us to be increasingly innovative when it comes to product development and a new application for our customers. we are able to provide an integrated product solution at premium quality.

Core value
Pursue:
Our pursuit is to realize customers'dreams in the field of health, and relying on a drip by drip, perseverance and hard pursuit, we become the world's leading enterprises.

Employee:
Serious, responsible and effective management is the greatest wealth of excellence. Respect for knowledge, personality and collective struggle to make our cause grow continuously

Technology:
Widely absorb the latest research results in the field of health, modestly learn from excellent enterprises at home and abroad, develop and cooperate to develop leading technology systems, so that our products stand on their own among the world's top health powers.

Spirit:
To love our motherland, people, cause and life is the source of our cohesion. Responsibility consciousness, innovation spirit, dedication and solidarity, and cooperation spirit are the essence of our corporate culture, and seeking truth from facts is the criterion of our behavior.